Scientists in Japan have successfully transplanted mice with lab-grown skin that has more of the organ’s working parts in place than ever before.

Starting with stem cells made from a mouse’s gums, they managed to craft skin with multiple layers – as well as hair follicles and sweat glands.

When implanted into a “nude mouse” with a suppressed immune system, it integrated well and sprouted hairs.

Researchers say this success will take 5-10 years to translate into humans.

But eventually, the team hopes their system will lead to perfectly functioning skin that can be grown from the cells of burns victims and transplanted back on to them. 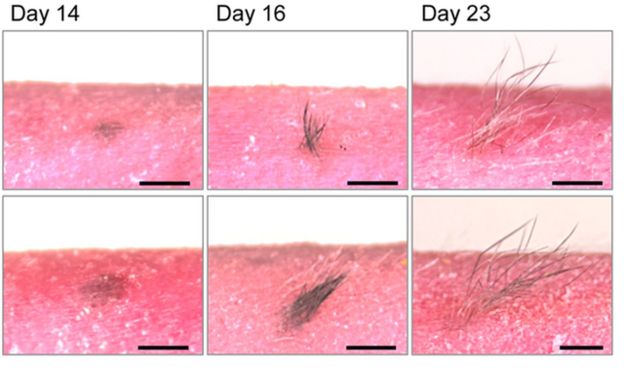 This would be vastly superior to the culturing and grafting techniques that are currently available, which produce skin without many of the the biological components and functionality that we are used to.

The technique could also be adapted to manufacture realistic skin samples that drug or cosmetics companies could use to test their products – instead of using animals.

The findings, reported in the journal Science Advances, have been greeted with enthusiasm by other scientists working in this field.

Takashi Tsuji is the paper’s senior author. He said the dream of re-growing personalised organs was beginning to materialise:

“Up until now, artificial skin development has been hampered by the fact that the skin lacked the important organs, such as hair follicles and exocrine glands, which allow the skin to play its important role in regulation.

“With this new technique, we have successfully grown skin that replicates the function of normal tissue.

“We are coming ever closer to the dream of being able to recreate actual organs in the lab for transplantation.”

Dr Tsuji, from the Riken Centre for Developmental Biology in Kobe, conducted the research with colleagues in Tokyo, Sagamihara and Sendai.

They began their experiments by taking cells from the gums of a mouse and converting them into “induced pluripotent stem cells” or iPSCs.

This is a popular and promising technique in stem cell research, discovered in 2006, which bathes the cells in chemicals to “wind back the clock”. The resulting cells, like those of an embryo, can divide again and again, and be guided down many developmental pathways to become nearly any type of cell in the body.

The team’s real achievement was in coaxing these cells to form the different layers and structures of deeply layered skin – the “integumentary organ” that protects our bodies, senses touch, regulates heat and does myriad other jobs as well.

John McGrath, a professor of molecular dermatology at King’s College London, said this study was one that researchers in his field had been looking out for – and it was a substantial step forward.

He told BBC News that the new system took us “over the halfway mark” towards growing functional skin for human patients – where previous efforts had stumbled at much earlier stages.

“It’s recapitulating normal skin architecture,” Prof McGrath said. “So rather than having isolated bits of skin… here we’ve actually got a whole box of stuff.

“To give you a football analogy: anybody can have Wayne Rooney, but now we’ve got Manchester United. There’s a whole team on the pitch, of interacting players.”

And that means there is hope, he added, for lifelike, lab-grown skin.

Prof McGrath also said that many other laboratories would now be trying to reproduce these findings – and to adapt them for different purposes, such as recreating skin diseases in a dish and trying out treatments.

“There will be lots of benefits for immediate use, as well as for translational science,” he said.