Home
Technology
Gadgets
Now anyone can build their own version of Microsoft’s racist, sexist chatbot Tay

Microsoft has released open source tools for people to build their own chatbots, as it set out its view of the immediate future of artificial intelligence as conversational aids similar to its back-firing Tay experiment.

The company’s chief executive Satya Nadella took to the stage at Microsoft’s Build developer conference to announced a new BotFramework, which will allow developers to build bots that respond to chat messages sent via Skype, Slack, Telegram, GroupMe, emails and text messages. “Bots are the new apps,” Nadella said.

The announcement came on the same day that the company had had to pull its chatbot experiment Tay from Twitter after it tweeted about taking drugs and started spamming users. It had only been active again for a few hours after previously being deactivated for making racist and sexist comments and denying that the Holocaust happened.

Nadella said: “As an industry, we are on the cusp of a new frontier that pairs the power of natural human language with advanced machine intelligence.” 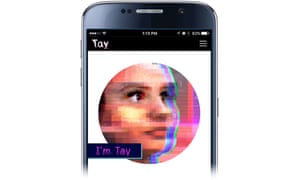 Going to the users

Several companies are chasing the dream of a chatbot that will be able to do it all for you, integrating themselves into the services users already utilise across mobile and desktop rather than trying to get people to use yet another app.

Microsoft also has its Cortana voice assistant, which gained additional services and frameworks to allow developers to use it on its own or in conjunction with the Bot Framework.

For Microsoft the move is about injecting itself into the lives of those who are not Microsoft service users. Chatbots and Cortana extensions mirror its work with Android and iOS apps, where the company has produced dozens of apps and services, most of them free and decent, for rival platforms.

This change of mentality is an important step to making Microsoft more relevant in a mobile space dominated by others. Going to competing platforms, to where users already are to get them hooked onto your services could prove a much more effective strategy than attempting to get them to switch platforms or adopt a Microsoft ecosystem wholesale.

Either way, with Microsoft’s successes in China and its abject failure in the US with Tay, the company, like many other big US technology firms, is pushing chatbots hard. Whether they will be genuinely useful for users remains to be seen.