Home
World News
‘We’re Horrified’: At Stanford, The Impact Of A Sexual Assault Is Searing

It could have been mistaken for any other late afternoon in the expectant days before graduation. Seniors shuttled four years of possessions from the Kappa Alpha fraternity into waiting U-Hauls that would carry them away from Stanford for the last time.

But the students weren’t talking just about commencement, or summer, or jobs ahead. Their conversations this week, like so many on this elite campus these days, kept turning to sexual assault. 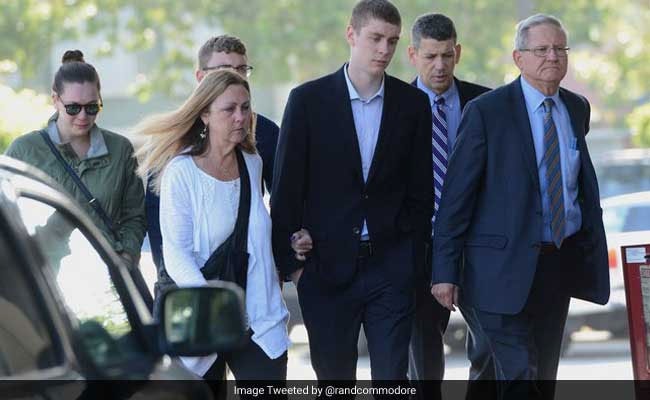 It was inescapable on their phones and laptops, what happened just a few hundred feet away and its lingering impact: A woman left one of their parties drunk, passed out behind a dumpster and was attacked by a Stanford swimmer.

“We’re horrified that this happened here,” said Dominick Francks, 22, a Kappa Alpha brother majoring in atmosphere/energy and computer science. “Everyone is pretty blown away.”

As the nation was riveted this week by the victim’s account of the January 2015 assault and its effects on her, this community has continued to cope with — and learn from — what has become a prime example of the problem of college sexual violence. Here, at Stanford, it overshadowed everything else.

Within an hour of the victim’s letter being posted online, Kappa Alpha fraternity brothers’ phones lit up: “You need to read this.”

Fraternity members said they were deeply shaken by the letter, describing it as eloquent, eye-opening and brave. One said he hoped the letter would become required reading at Stanford.

The case resonated nationally because it encapsulated the problem of sexual assault on campus, with all its complexities and jarring headlines, from the Baylor football team’s assaults that led to the ouster of the school’s football coach and president to high-profile cases at Vanderbilt, Florida State and so many others.

People argued over whether binge drinking was to blame, or fraternity culture or the entitlement of privilege. Some saw it as proof that sexual assault is treated differently when the accused is an athlete, a campus leader, an outstanding student. A statement from Turner’s father — arguing against jail time because the life his son had worked so hard to achieve would never happen and saying “That is a steep price to pay for 20 minutes of action out of his 20 plus years of life” — went viral.

Here in Palo Alto, the impact is visceral. Inboxes and social media are full of links to petitions: People demanding better support from the university for sexual assault victims, calling on Stanford officials to apologize and pay for the victim’s therapy, and asking the judge in the case to step down. A protest is planned for Sunday at an annual commencement event.

“Everyone on campus is talking about it,” said Dulcie Davies, a graduating sorority member who plays field hockey. “Everyone is sharing everything on Facebook.”

The reaction to the victim’s letter was the culmination of many months of soul-searching, said Victor Xu, a rising senior who is managing editor of The Stanford Daily. It’s a constant topic of conversation online and on campus, over dinner, in random conversations with friends and within families, he said.

It was just outside the Kappa Alpha house last year that a freshman left the party drunk and sexually assaulted an unconscious woman. Brock Turner, a varsity swimmer and Olympic hopeful, withdrew from the school, was banned from campus and was convicted of three felony counts of sexual assault.

When the 20-year-old from Ohio was sentenced last week — to six months in jail, three years of probation and a life as a registered sex offender — many people were shocked. The prosecutor had asked for six years in prison.

When the letter the victim read in court, 12 pages of eloquent agony, was published on Buzzfeed, it ignited: More than a million people signed online petitions demanding that Santa Clara County Superior Court Judge Aaron Persky be removed from the bench, and a formal recall effort was launched. Persky got death threats.

The events prompted difficult questions within the university’s Greek system. Although Turner was never a member of Kappa Alpha, the fact that he met the victim at one of their parties, and assaulted her nearby, was troubling to many at Stanford.

In recent months, fraternities have hosted women’s groups to talk about sexual assault. Kappa Alpha had events on sexual health and masculinity. Members said they saw brothers break down in tears as they shared stories about pressure to succeed — academically, athletically and with women — and not show vulnerability.

Fraternities had been on notice since July 2014, when sexist jokes at a toga party at Sigma Alpha Epsilon led to harassment complaints. The students later permanently lost their house.

News of the Turner assault made women on campus feel less safe, Davies said. But the victim’s letter, released last week, and the campus discussions in recent months, also had some positive effects, she said.

“It just brought to light the smaller situations that happen,” Davies said. “Now people are coming to terms with saying things like sexist comments are not okay. In the past, it would have been played off. Now people are willing to speak out against it.”

Students and faculty were divided about whether Stanford had done enough.

Stanford has taken aggressive action in recent years to combat campus sexual assault, university officials say, including establishing a “yes means yes” affirmative consent standard in 2012 — before it became California law — in an attempt to avoid confusion about whether sexual contact is welcome. The school requires students to learn about prevention and changed how sexual assault cases are judged, with an expectation of expulsion when a student is found responsible for sexual assault. Next year’s budget includes $2.7 million to counter sexual violence.

A Washington Post analysis of federal data put Stanford among the top 10 schools with the highest number of rapes reported in 2014, with 26.

“I think what [the case] boils down to is that there’s a real disconnect between how people perceive rape that happens on campus and rape that happens off-campus. And, really, you know, rape is rape,” said Matthew Cohen, a sophomore and member of the student senate. “It should be treated the same way whether it happens on university campus or not.”

Michele Dauber, a Stanford law professor who is friends with the victim, said that the university had yet to apologize. The woman was not a Stanford student.

“They’ve never shown any remorse that this happened on Stanford property,” Dauber said. “You create this culture, not of alcohol but of toxic masculinity, in which misogyny is really deep and it’s always somebody else’s fault.”

Dauber introduced a new course last year for sophomores on sexual assault at universities because she had “a line of girls” outside her door who said they had been assaulted. The students in the course later formed a group that advocates for sexual assault prevention.

“Stanford looks at sexual assault cases from the lens of protecting its brand,” said the group’s organizer, Stephanie Pham. “Maybe it’s this need to forge an image of a perfect university where sexual assault doesn’t happen.”

Francks, the Kappa Alpha member, said he was home the night of the party in January 2015 but went to sleep early ahead of a morning golf event. He said more needs to be done.

“Why are we training girls how not to get raped but not teaching boys not to rape?” Francks said. “A lot of changes need to be made. But some are happening already.”